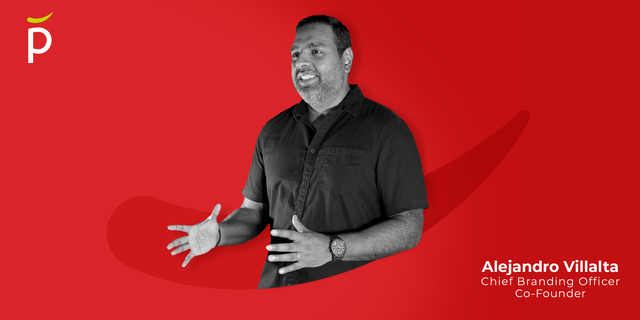 A few months ago we celebrated our twelfth anniversary of foundation, so we want you to know a little more about the journey we have had spicing up brands.

It all started as a result of the world economic crisis between 2007 and 2009, a situation that caused job losses and particularly generated a greater impact on our country. So, on August 12, 2008, Pepper Design was born with the objective of offering companies a more economical option but with great graphic quality within the reach of small and medium businesses.

The name came up in a creative session in which the color red of pepper influenced to choose it, because it is the color used by big and strong worldwide brands. The word  pepper can have many meanings, for us it is the spice that gives a different flavor to everything it touches, that's what we do, we spice up brands.

And so we grew gradually to have accounts like Nestle, Colgate, LiveSmart, etc. We have also done regional projects such as the Rebranding of Almacenes Tropigas, regional law firms such as Sáenz y Asociados, Grupo Roble, Bolívar, among others.

Just one year after our foundation, we were awarded two scholarships to receive training in the creation of packaging design at El Zamorano University in Honduras. In 2010, Pepper Design & Branding was the top winner of two "Arroba de oro" awards for the design and programming of our website.

In 2017 we were selected between than 300 mo companies by the American Embassy's "BPeace" program ,https://www.bpeace.org/  in which we received several trainings in different areas and thanks to that we made drastic changes in the business model and focused more on branding. In 2018 we became a fully specialized branding agency, advised by several experts from global companies, including the creator of CNN en Español's business model, who was also our mentor.

In 2019 we were a success story for the Wise and Expert program, https://sabiosyexpertos.org/2019/11/01/pepper-design-cambio-modelo-negocios due to the creation of a strategic plan to communicate locally the new concept that was being implemented.

As branding experts,  during these first 12 years, we have created more than 1,200 brands, refreshed more than 600, from small to large companies, both national and international. For that reason we thank all the people who at some point were part of our team and made it what we are now, but above all we thank the people who work here now, with great passion for branding.

We are Pepper Design & Branding and we know Brands!

If you want to spice up your brand visit www.pepper-design.net or write to our social networks.

It's time to reinvent your business

The COVID-19 crisis has transformed the reality in which we lived, taking everyone by surprise and changing the way of selling, because the quarantine was not expected to last for so long. It is important to emphasize that the longer the isolation lasts, the greater the economic impact and above all, the change on the behavior of consumers towards brands. Many businesses have been affected by the decrease in their sales, the stop on their operations and even others have been forced to close permanently. Therefore, the importance of knowing how to reinvent your business; and that is precisely what we share with you in this article.

We are already in 2020 and as every year, we must investigate and be aware of the marketing trends that are in force and will be used more frequently to be as prepared as possible for any adversity.

5 tips to humanize your brand

Over time there have been many changes in making brands more attractive to their consumers. Previously, brands did not care about the customers or sympathize with them, their objective was only to sell. Then they realized that in order to sell more they had to be a little friendlier and made some adjustments to be more attractive and reach new targets.