Home > Pepperfolio > Branding for a coffee in search of new targets
03 June, 2019 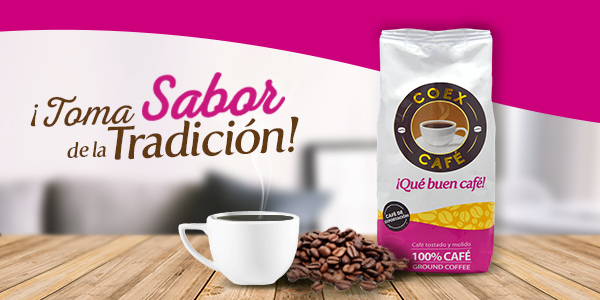 Coex Café is the best known brand of the COEX group, which is dedicated to the preparation and export of roasted and ground coffee 100% Salvadoran. This coffee is consumed at a massive level, and is known to be a traditional coffee.

Pepper Challenge
Redesigning the packaging of Coex Café was the main mission. We wanted to make a new packaging design that was more current to attract new market niches, mainly to young people.

The new design should be modern, however, it was important to always maintain the characteristic aspects of the brand. All this to achieve that Coex will return to the top of mind of the Salvadoran market. The Pepper Solution
The process began with the redesign of the brand's logo, a change was made keeping the essence of the logo, because they wanted to preserve the tradition characteristic of the brand. To achieve this, elements such as typography and certain visual components such as the cup were worked on.

Subsequently, for the freshening of the packaging, more vivid and fresh colors were used to attract the eye of the young. It was a combination of striking colors, contrasting the fuchsia with a yellow to generate visual impact, hand in hand with whites and coffees, representative of the traditionalism of the brand. "With the new image and the digital campaign created by Pepper Design & Branding, we succeeded in re-launching the brand and retaking the top positions in Top of Mind of the coffee industry"

Branding to grow up in the book stores market

Librerías Josué was born in 1977 It’s a book store company focused in the religious literatura sale, the principal purpose is to be a pleca where people can find resourses for learn and grow in their christians values.

Digital branding for times of crisis

Super Carnes is a new company which delivers meat and complementary products. It is a brand mainly characterized by its quality, hygiene and freshness, it is aimed at a massive market, since they have a great diversity of cuts, from the most popular to the special ones. Super Carnes has a variety meats, including: beef, chicken, pork. In addition they also offer accessories such as charcoal, condiments and drinks to accompany your meat.

CREDICAMPO, is a financial company operating in the East of El Salvador. It was born as part of an initiative to support people in rural areas. The project started as a foundation and later evolved into a financial one, granting loans for micro entrepreneurs.